New Jerusalem News...read (all about) it!


This is a book that I might have missed if it were not provided to me for purposes of a review. I went into it without even glancing at the summary because I was ready to be surprised. I am glad I had the chance to spend some time with such a wonderful story. There is so much going on and it does feel very true-to-life in the way it is presented. There is a bit of mystery and intrigue, but above all, there are interesting characters and a well-told story that is not quite a whodunnit, but more of a "what is really going on" sort of tale.

While I did find the "romance scenes" somewhat blocky and awkward, I am not entirely sure that was not by design. The ending sort of reminded me of an episode of Seinfeld where I sort of had to ask myself if that was actually it.
This is something you might miss or pass over for a number of reasons, I would advise you to reconsider. This is the perfect way to spend a blustery day (or two).


Book Description for New Jerusalem News:
Dominick is always just passing through. He is a professional houseguest who follows the sun and the leisure class from resort to resort. But this winter he lingers on a quaint New England island and in spite of his best intentions becomes involved in the travails of his eccentric geriatric hosts. An environmental protest against a proposed liquid natural gas terminal turns ugly, and by accident and happenstance Dominick becomes a mistaken suspect in terroristic bombings. But the book, of course, is really about its characters. None of them are young—white-bearded men and blue-coiffed women busy with aging, dementia, and ungrateful children. Dominick strives to float above it all in a life of itinerant escape. A New England comedy of sorts, New Jerusalem News, on another level, is an extended meditation on history, identity, and what it means to drift.
Buy the book:    Amazon   Barnes & Noble    Book Depository 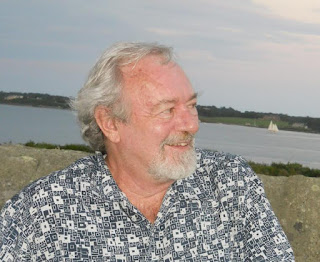 Author's Bio:
Originally from Buffalo, New York, John Enright holds a bachelor’s degree in literature from the City College of New York and a master’s degree in folklore from the University of California, Berkeley. After working in magazine journalism and book publishing, he left the U.S. to teach at the American Samoa Community College. He remained in the South Pacific for 26 years, directing environmental, cultural, and historical preservation programs and writing extensively about the islands. His acclaimed detective series, Jungle Beat (Thomas & Mercer), featuring Det. Sgt. Apelu Soifua, is set in Samoa. His collection of poems about Samoa, 14 Degrees South, won the University of the South Pacific Press’s inaugural Literature Prize for Poetry in 2011. He now lives in Jamestown, Rhode Island, with his wife, ceramicist Connie Payne.
Connect with the author:   Website   Twitter    Facebook

All my stuff can be Kindlegraphed with a click HERE!

All your TW Brown Needs...